What is the larynx? 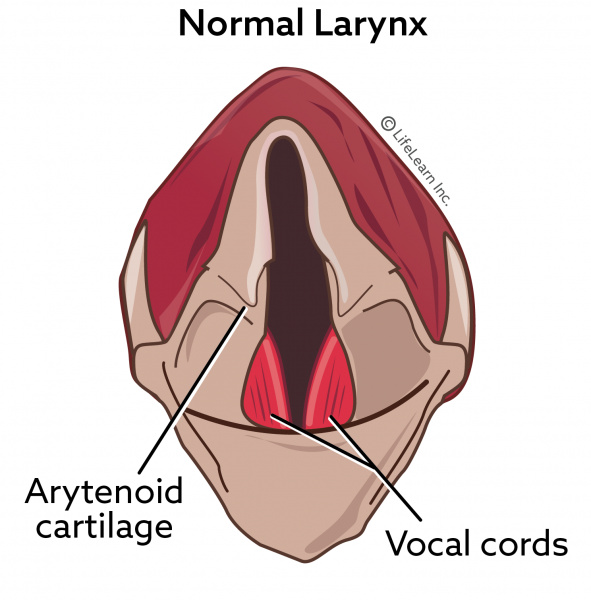 The larynx or voice box is composed of a series of separate plates of cartilage that form a box in the throat. Its most important function is to close off the trachea (windpipe) and lungs while eating and drinking. It opens wider if a deep breath is needed.

What is laryngeal paralysis?

The stability of this box is maintained by the laryngeal muscles. When the nerves of these muscles become weak (paretic) or paralyzed, the muscles relax, and the cartilages tend to collapse inwards resulting in laryngeal paralysis.

Recent studies have led to the conclusion that most dogs with idiopathic laryngeal paralysis have a neuromuscular disease and that this is one of the first signs of the disease.  A new term, geriatric onset laryngeal paralysis and polyneuropathy (GOLPP), has been developed to describe this.

Whatever the cause, nerve paralysis rapidly leads to laryngeal muscle wasting (atrophy).

The most commonly affected breeds for idiopathic laryngeal paralysis are Irish Setters and Labrador Retrievers. The congenital form is seen in Bouvier de Flandres, Siberian Huskies, Bull Terriers and Dalmatians, and clinical signs usually occur at an early age in these breeds.

What are the clinical signs of laryngeal paralysis?

The clinical signs of laryngeal paralysis vary widely. Unfortunately, laryngeal paralysis is probably more common than it is diagnosed. It usually affects middle aged and older dogs. Medium and large breeds are more likely to develop the condition. One of the primary reasons the condition is under-diagnosed is due to the fact that the initial signs often only involve a shortage of breath, noisy breathing, or a cough.

"Coughing, especially after exercise or exertion, is probably the most frequently reported sign."

Coughing, especially after exercise or exertion, is probably the most frequently reported sign, followed by noisy breathing, exercise intolerance, and a change in the sound of the bark (dysphonia). Coughing may be stimulated by eating or drinking. These signs are more common in older dogs. Unfortunately, these signs are often also associated with advanced age, cardiopulmonary disease, and bronchitis, especially if the dog is obese.

In sudden, severe cases the dog may develop respiratory distress with bluish mucous membranes (cyanosis) of the mouth and may collapse.

How is laryngeal paralysis diagnosed? 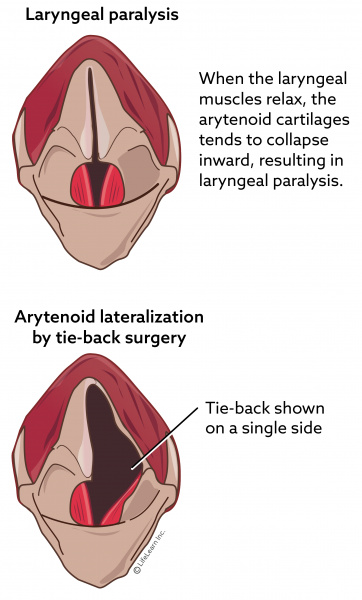 Diagnosis is based on medical history and clinical signs. As mentioned, coughing and shortness of breath are often the only early signs of the condition. Diagnostic tests that may be recommended include blood and urine tests, chest radiographs (X-rays), but ultimately examination of the larynx with an endoscope or laryngoscope is needed to confirm the diagnosis.

How is laryngeal paralysis treated?

Mild cases of laryngeal paralysis can often be controlled with medications such as anti-inflammatory drugs, antibiotics, and sedatives. Anecdotally, a medication called doxepin (brand name Sinequan®) has shown varied success in some cases; however, more studies are needed to determine its effectiveness.

Avoid hot environments and strenuous exercise with your pet and do not use collars that will put pressure on your dog’s neck. Harnesses are recommended for affected dogs.

In severe or congenital cases, surgery is indicated. Patients with laryngeal paralysis are at slightly increased risk of anesthetic complications. Surgical correction is often very successful at reducing or eliminating clinical signs.

What does the surgery involve?

There are several surgical techniques available. Surgery will be based on the severity of the patient's condition. A common surgical procedure involves arytenoid lateralization by tie-back. This involves tying the collapsed cartilage to the side of the larynx to prevent it from creating an obstruction to breathing.

Surgery will often dramatically improve an affected dog's quality of life but does not restore laryngeal function. Your veterinarian will discuss the anesthetic concerns and the specific surgical technique with you prior to surgery. Patients with laryngeal paralysis are at slightly increased risk of anesthetic complications. Surgical correction is often very successful at reducing or eliminating clinical signs.

© Copyright 2018 LifeLearn Inc. Used and/or modified with permission under license.