What is eosinophilic keratitis? 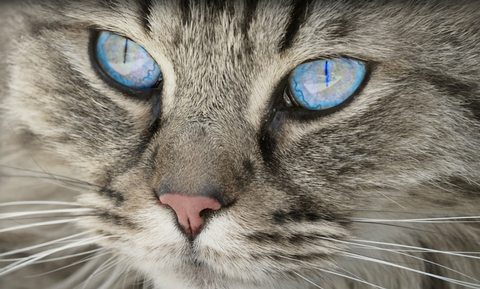 Eosinophils are cells that are typically involved in allergic reactions, as well as the body’s immune reaction to parasites. At this time, we do not understand the cause of feline eosinophilic keratitis, or know why the eosinophils invade the eye in these cats. Researchers have observed that up to 75% of cats with eosinophilic keratitis also have feline herpesvirus (an upper respiratory infection that can affect the eye); this suggests a possible link between the two conditions, but the details of this association are unknown.

What are the clinical signs of eosinophilic keratitis?

Lesions are often first noticed at the edge of the cornea, sometimes extending from behind the third eyelid, but they will gradually spread across the cornea. Over time, the entire surface of the cornea may be affected. Chronic lesions may sometimes develop a gritty texture, due to calcium deposits within the lesions. The underside of the eyelids, as well as the third eyelid, may also become inflamed and thickened.

Squinting and pain may develop, due to the irritation of blinking and rubbing the eyelids across these raised, gritty lesions. Affected cats often develop thick ocular discharge, which may cling to the surface of the eye,  and may also have constricted pupils (due to pain) and sensitivity to light.

How is eosinophilic keratitis diagnosed?

Diagnosis is often based largely on clinical signs. Confirming the diagnosis requires  corneal cytology, which involves scraping a small sample off the surface of the eye and using a microscope to assess for the presence of eosinophils and mast cells (another type of inflammatory cell). Further testing may also be required to rule out other possible causes of corneal inflammation, such as glaucoma, corneal ulceration, and inadequate tear production.

How is eosinophilic keratitis treated?

Eosinophilic keratitis is typically treated with topical steroid medication, though oral or injectable steroids may be required in severe cases. Because steroids can cause worsening of corneal ulcers, any corneal ulcers that your cat has will need to be treated with antibiotics before starting steroids. Some cats may also receive topical medications to decrease pain and decrease pupillary spasms.

"Frequent rechecks are often needed, in order
to monitor your cat’s response to therapy and
adjust treatment plans as needed. Medications
will be tapered to the lowest effective dose;
however, your cat will likely remain on lifelong
therapy to prevent recurrence."

Frequent rechecks are often needed, in order to monitor your cat’s response to therapy and adjust treatment plans as needed. Medications will be tapered to the lowest effective dose; however, your cat will likely remain on lifelong therapy to prevent recurrence.

Surgical approaches have also been described to remove the abnormal tissue from the cornea of severely-affected cats, but there are currently no clinical studies to support the use of this procedure. Additionally, surgery requires that cats go through a period of time without steroid treatments, and this lapse in treatment may lead to worsening of the disease.

Weeks to months of treatment are often required to control the clinical signs of eosinophilic keratitis, and the rate of recurrence is high as medications are tapered. If the eye was severely affected prior to starting treatment, corneal scarring or deposits may persist; however, it is often possible to provide good vision and quality of life for even severely affected cats, as long as medications are maintained as directed.

© Copyright 2017 LifeLearn Inc. Used and/or modified with permission under license.