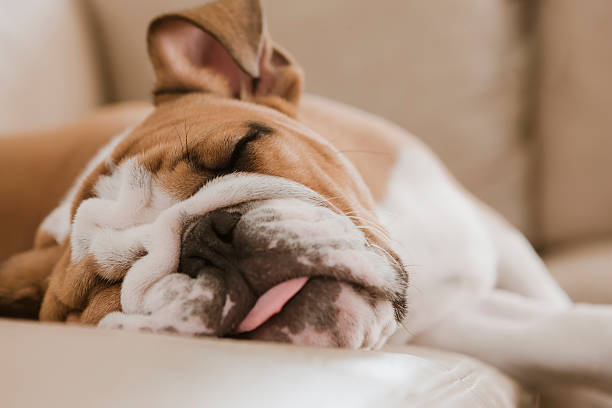 Unlike humans, dogs can not lie down on a therapist’s couch and describe their dreams. It can only be assumed that dogs have dreams. Though it is impossible to get a first-hand account of their dreams, scientific evidence indicates that dogs do, indeed, dream.

Dreams occur during sleep and understanding the sleep process helps define what dreams are. Sleep is a natural state of being where consciousness and voluntary muscular activity are reduced in both people and animals. Sleep is very important for growth and allows downtime to recharge body systems. While sleeping, the brain also processes information and experiences that occurred during waking hours. Dreaming is part of this sleep cycle. When you dream, you are not fully conscious, so while your dreams can be quite vivid and seem very real, you do not actually smell, taste, or feel anything.

During sleep, the brains of humans and dogs function in a similar manner and exhibit brain wave patterns that show a difference between the two basic stages of the sleep cycle. When you or your dog first fall asleep, you experience SWS (slow wave sleep), when brain waves are slow and undulating. During this stage of the sleep cycle, mental processes are quiet, but muscle tone is still active, so the body is not totally relaxed. Your dog will appear to be resting calmly but he can easily be awakened during SWS.

Later, a deeper stage of sleep occurs, marked by rapid eye movements. This stage is called REM sleep, during which brain waves are faster and irregular. Unlike SWS, muscles are more relaxed during REM, but the mind is more active and the eyes dart rapidly beneath the eyelids. During this stage of heightened mental activity, your dog may whine, breathe rapidly, and move his legs.

Both humans and dogs experience both stages of the sleep cycle. We know that humans dream, and since the sleeping brains of dogs and people go through similar stages of electrical activity, it is safe to assume that dogs dream, too. Scientific research demonstrates comparable brain wave patterns in humans and dogs which validates this assumption. The conclusion is that dreams are part of the normal sleep cycle, and dogs do indeed have them!

What do we know about dog dreams?

Even though dogs don’t awaken and describe their dreams, scientists have managed to gather information about canine dreams and sleep patterns through clinical observations. Some of their findings include:

"Like his owner, a dog may relive daytime experiences and “sleep run” as he chases a cat or fetches a ball."

During REM, the sleeping brain functions much like it does when awake. Dogs and people dream about things that occurred during their waking hours. Information gathered during the day is processed at night and may be relived in dreams. This, however, includes a safety feature, the pons. The pons is part of the brain that stops you from physically acting out your dreams. Even though you may feel like you ran a marathon or jumped out of an airplane, you are safely tucked in bed. Like his owner, a dog may relive daytime experiences and “sleep run” as he chases a cat or fetches a ball.

How often do dogs dream?

Some dogs dream more than others, and the frequency and length of dreams vary according to age and size of the dog. For example, the young, innocent minds of puppies experience more dreams than adult dogs. Puppies acquire huge amounts of new information daily and have much to process at night.

Smaller dogs seem to have more dreams than their bigger friends. Research suggests that the length and frequency of dreams may be related to the animal’s size. A toy poodle may dream every 10 minutes, while a Labrador Retriever may only dream once every 60-90 minutes. However, the poodle’s dreams may last only a minute while the Labrador’s dreams may be 5-10 minutes long. Dream length and frequency are also related to the amount of sleep required. A large dog that has an active day outside may sleep more soundly and experience longer phases of REM sleep, giving him more time to dream.

Do dogs have nightmares?

Some owners are awakened from their own dreams when their dogs whine or thrash about. It may be alarming to see your dog running in place while sleeping or hear him whimper, but do not be frightened. Although it is annoying to have your sleep interrupted, there is no need to worry about your dog’s nighttime antics – most dreams are not nightmares. Dreaming is a normal, healthy occurrence and is part of a regular 24 hour cycle of wakefulness and sleep.

It is important to note that dogs and humans need uninterrupted sleep for health of mind and body. Provide your dog a quiet, comfortable, area to rest and do not disturb them. Approximately 60% of dog bites in children occur when the child wakes a sleeping dog. It is important to teach children to not wake a dog when he is sleeping.