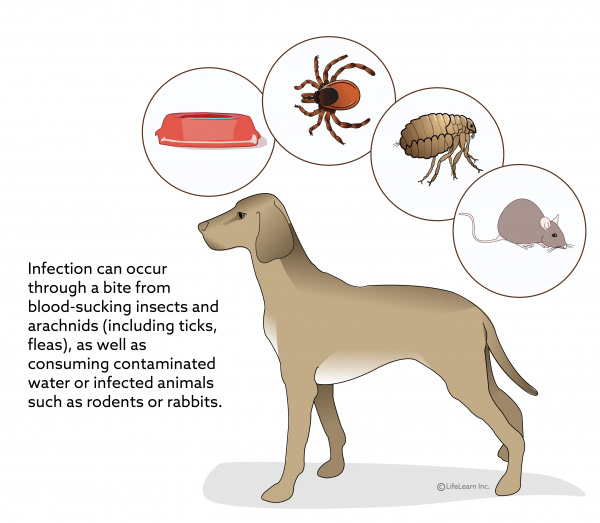 Tularemia is a bacterial disease caused by Francisella tularensis and is often referred to as rabbit fever. Tularemia is most commonly found in rabbits and rodents, and it survives by creating tumor-like masses and abscesses in the victim animal's liver. It is a disease that is not seen at all in the United Kingdom, Africa, South America, or Australia. In North America, tularemia cases are scattered around the continent. It is most commonly seen in the late spring and summer.

Tularemia is an uncommon infection in dogs, but dogs can be exposed if they kill or eat an infected rabbit or rodent or through insect bites.

How is tularemia transmitted?

Infection with Francisella tularensis can occur in several ways:

Once the bacteria are in the lymph system, the organism can be found in the lungs, liver, spleen, and the bone marrow.

What are the signs of tularemia infection in dogs?

Tularemia is a rare infection in dogs and dogs are known to be less susceptible to illness than other species. Tularemia is often self-limiting although some dogs experience short periods of poor appetite, lethargy, and mild fever. Less frequently, dogs may show conjunctivitis, uveitis (inflammation in their eyes), draining abscesses, and enlarged lymph nodes.

How is tularemia diagnosed?

In order to diagnose tularemia, other diseases that cause the signs outlined above must be ruled out.

Diagnostic tests typically include a complete blood count (CBC), a blood chemistry panel, and a urinalysis. Testing will reveal a high white blood cell count, low blood sugar, low blood sodium, and a high blood level of bilirubin. There may also be blood in the urine.

Can tularemia be treated?

Tularemia can be treated with antibiotics. Dogs may require hospitalization with supportive care (intravenous fluid therapy). Draining abscesses should be surgically removed.

Can I catch tularemia?

Tularemia has a high zoonotic potential, meaning it can infect humans. Humans can become exposed from tick bites and drinking contaminated water; however, bites or scratches can also be a source of exposure. The bacteria create a blister in the skin 3-5 days after contact. The blister ulcerates 2- 4 days later, then the bacteria enter the lymph system, spreading to the rest of the body.

When hospitalized, these dogs are isolated, and the veterinary team will wear protective gear during treatments. Tularemia is a reportable disease, meaning it is of such great public health importance that doctors and veterinarians are required to report diagnosis of the disease to their public health authority.

© Copyright 2019 LifeLearn Inc. Used and/or modified with permission under license.